French Fashion from the 15th to 18th Century

Clothes were not invented simply to keep us warm and comfortable. Since ancient times, there have been important links between art and fashion. The costume mirrors the ideal of the time. Throughout history, it has changed with the evolution of the society.

The costume is not only a necessity of life, but a piece of art that has features of a particular artistic style. Clothings reflect cultural trends that were popular during a certain time. In turn, all forms of art are the most valuable resources for studying clothes of each period. Through the study of fresco, sculpture and decorative arts, portrait and ganre painting we can trace the history of fashion.

Since the 17th century, Paris has dictated Western fashion. No wonder that fashion magazines first appeared in France in the late 18th century. The "golden age" of women's magazines lasted from the 1830s to the 1870s. Numerous journals were important guides to the changing world of fashion. They not only offered the latest fashion news and trends but provided information on the history of the costume.

In 1854, the Paris Fashions magazine published the Album of French Costumes from the Time of Charles VII to the Reign of Louis XVI . Twenty sheets depict the development of French fashion, both female and male, from 1460 to 1780. The album consists of hand-coloured engravings by Gabriel Xavier Montaut, Adolphe Portier and Marc Antoine Monnin, based on drawings by Francois Claudius Compte-Calix. 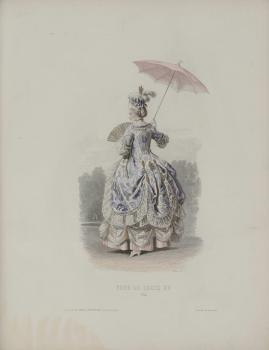 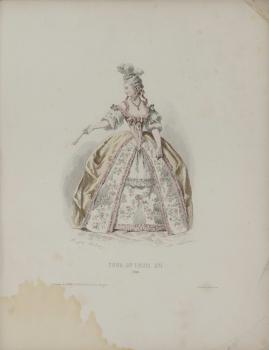 Compte-Calix (1813-1880) was a profilic artist whose poetic genre paintings were exhibited at the Paris Salon almost every year, beginning in 1840. They had a great success, so many of them were reproduced on engravings and lithographs. Compte-Calix himself practiced lithography. He also was a well-known portraitist and illustrator who created a whole number of illustrations for French fashion magazines.