The National Library of Russia invites you to explore a treasure of our Map Collection, the first city atlas Civitates orbis terrarum. The online exhibition takes you to a selection of cities in Renaissance Europe, Asia, Africa and South America for a virtual wander!

The great atlas contain more than 500 engraved and hand-coloured plans and map views of the world’s cities. It was first published in six volumes in Cologne between 1572 and 1618. The Civitates orbis terrarum went through 29 editions and was translated into many languages. The atlas is unparalleled in its size and richness of the decoration.

Most of the illustrations in the atlas show cities in Europe. Only 29 cities are located outside Europe in Asia, Africa and South America. This was due to the lack of knowledge and information about these continents in the 16th – 17th centuries. So not all contries and territories received equal coverage by the Civitates. Despite such an uneven distribution of data, the value, scope and breadth of the atlase is extremely high.

Braun, Georg (1541-1622), German cleric and geographer, publisher and editor, responsible for the historical and geographical texts accompanying the maps in the Civitates.

Hoefnagel, Joris, (1542-1600), Flemish draftsman, miniaturist who  made many city drawings for the atlas during his travels in Central Europe, .

It is possible that authors of the Civitates discussed ideas for their work together with Abraham Ortelius, the creator of the first true, systematic atlas Theatrum orbis terrarum of 1570. Evidence of this is in Braun's letters, as well as in the friendly and long relationship of F. Hogenberg, J. Hoefnagel and J. Deventer with the famous Netherlandish cartographer and publisher. Thus, although the Civitates orbis terrarum was published in Germany, it is an excellent example of the masterpiece of the Antwerp school of cartography and Netherlandish landscape art.

The most maps in the atlas were engraved from city panorama drawings made from life by Joris Hoefnagel. 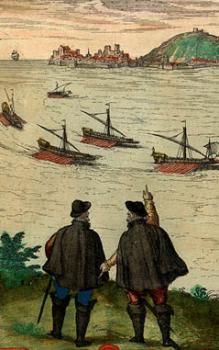 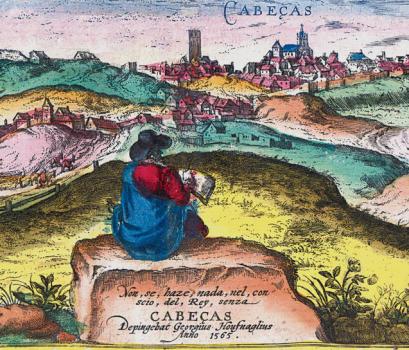 Not all the drawings were provided by Hoefnagel himself. Braun gathered material from map sellers and scholars, geographers and travellers throughout Europe and beyond.

One of the other sources for the city maps was the Cosmography by the German geographer Sebastian Münster (1489-1552).

Previously published maps were also used. For instance, the plan of Moscow was first published in the book Notes on Muscovite Affairs (Rerum Moscoviticarum Commentarii) by Sigismund von Herbersteinin 1556, and later was reproduced in the atlas. 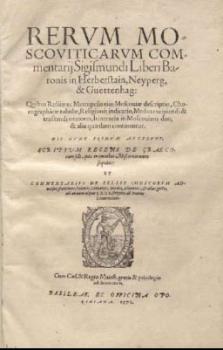 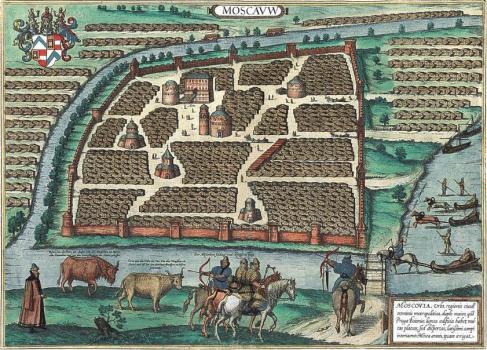 So, the information for the city maps was captured from a variety of sources.Thanks to this, three types of maps are found in the Civitates.

The most spectacular are perspective views. In these engravings, the city occupies no more than 1/3 of the sheet. It is shown from one side and is placed in the background. Meanwhile, the landscape and genre scenes are detaily depicted in the front. 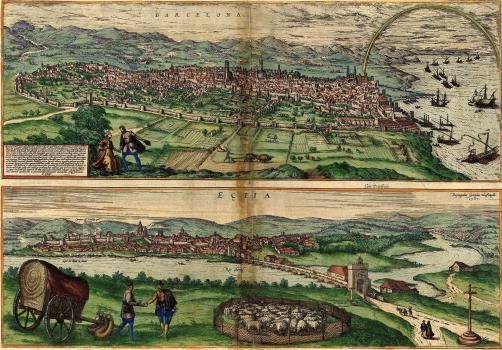 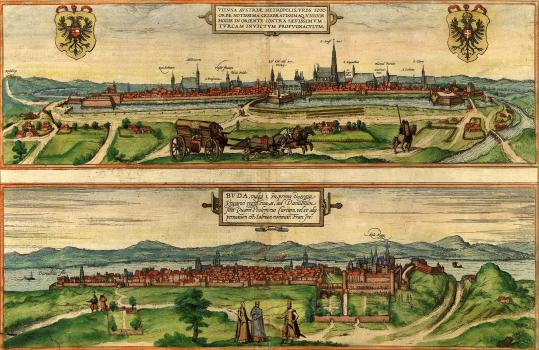 Panoramic plans that offers a bird's eye view of the city and the surrounding landscape are particularly illustrative. 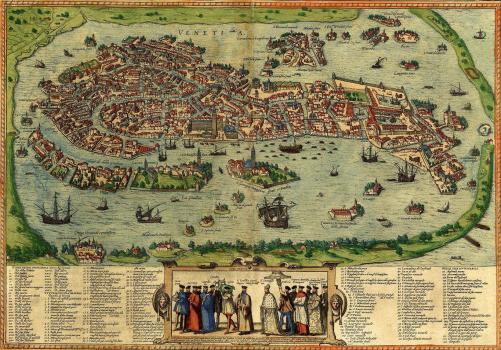 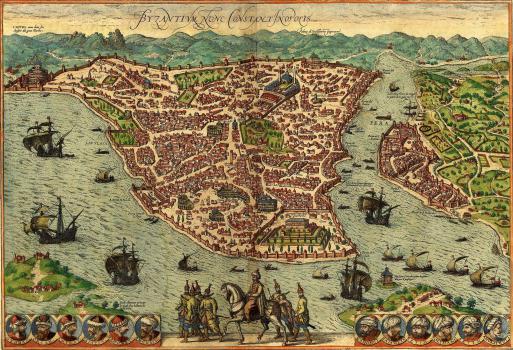 The atlas includes also very detailed plans based on topographic surveys. They most closely resemble mordern maps. The maps show the cities' building up with the perspective view of various quarters and individual buildings. Such works marked a turning point in cartography when art of city mapping became science and practice. 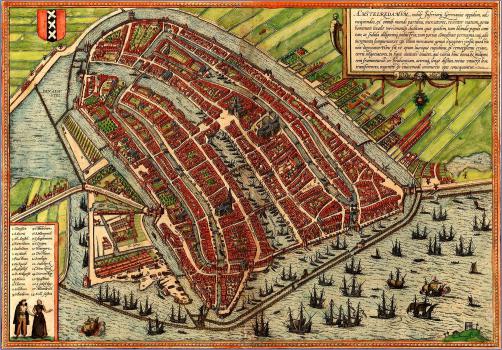 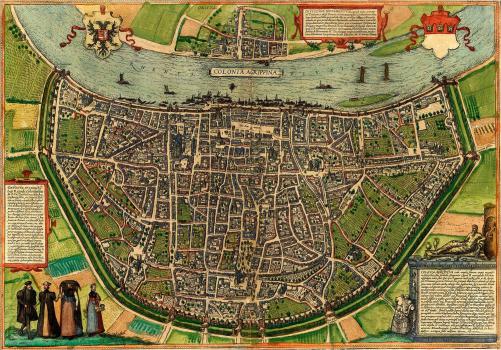 The plans for the atlas, like all printed maps of that time, were engraved in metal plate. Copper was the metal of choice because it allows for accurate images. A printing plate was first carved by the artist. Engraved copper plates were inked to print multiple images. Metal is soft: any change or addition to the plate could easily be made.

Metal plates are very durable. The map publishers tended to alter plates as infrequently as possible, despite the existence of the latest geographical information. The engraved plates for maps were of high value: they were inherited, brought as a dowry, and sometimes stolen. And plans from the plates of the Braun & Hogenberg's CityAtlas were printed for many more years. 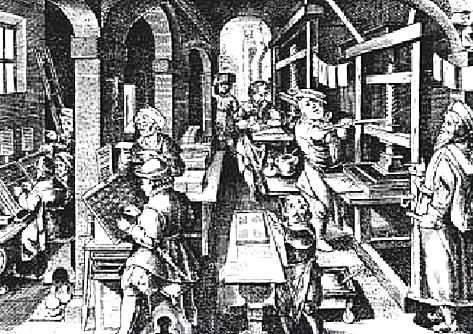 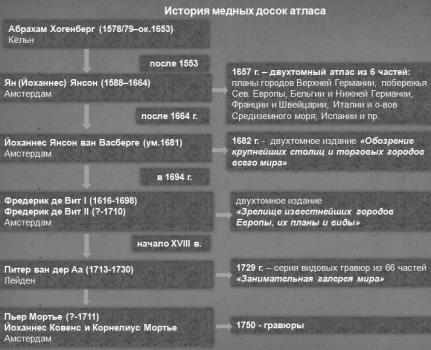 And just like all printed maps before the 19th century, the plans for the atlas are hand-coloured with natural pigments. The coloring adorned the map and clearly separated the elements of the content, making it easier to read. It was a very complex process that required a lot of skill and artistic talent. In Antwerp, the compilation and illumination of maps was considered as an art, and cartographers and illuminators, along with painters and sculptors, were part of an art association - the guild of St. Luke.

So, travel through the ancient cities with the atlas Civitates orbis terrarum!

We invite all connoisseurs of vivid impressions to visit Cairo. You will see the competition between Mamluks and Turks, pyramids and sphinxes, a garden with date palms and wells pumped out by animals walking in a circle. Or make a trip to the resort islands of Malta, Rhodes and Cyprus, which remain popular to this day. 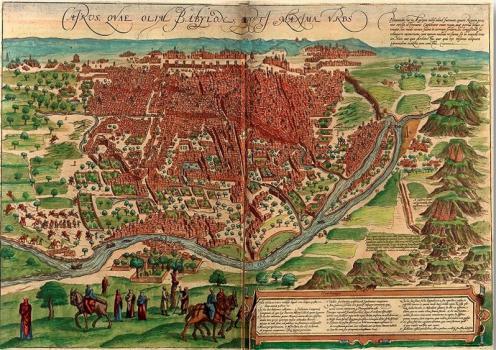 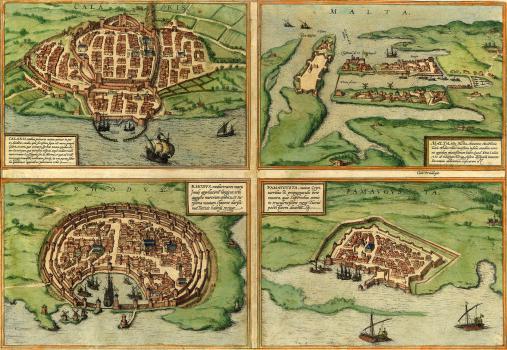 Some views will give you a lot of  food for thought and imagination. You may like to see London before the Great Fire of 1666 and Lisbon before the 1755 earthquake; as well as Cologne and Dresden before the destruction of the Second World War.

Rome, the Eternal City, can be seen both as it was in ancient times and in the era of the Renaissance.

You can discover some of the places associated with famous persons, including literary characters. For example, the map of Duisburg features the street where the famous geographer and cartographer G. Mercator lived, and the Church of the Savior (Salvatorkirche), where he is buried. And the map of Marseille shows the fortress, which later became a prison and became famous thanks to The Count of Monte Cristo by Alexandre Dumas. 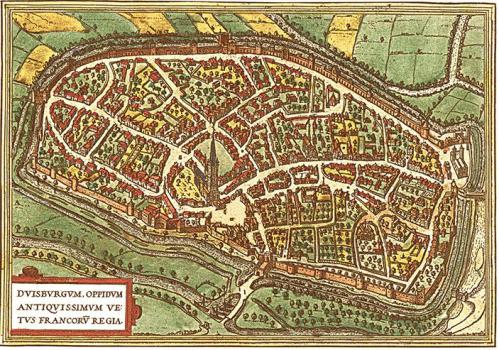 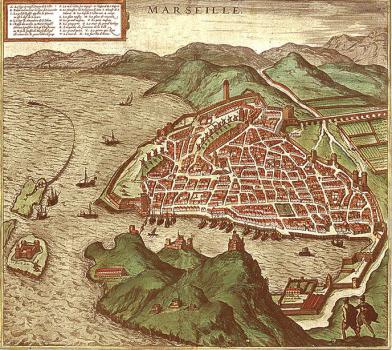 The pictures that decorate the maps feature Biblical scenes (the prophet Moses on Mount Sinai in the plan of Jerusalem), state occasions  (the plan of Grodno depicts the arrival of the Russian embassy at the Polish Seimas of 1567). They tell about local customs and traditional crafts. Thus, an illustration on the map of Seville shows the punishment of a harlot. In the pictorial map of Cadiz, we can see a scene of recruiting sailors, a trading scene, and flamenco dancing.

The drawings depict landmarks (the Rock of Lovers near Antequera in Spain), city and suburban places of interest (architectural views of Venice, a palace and a monastery near Madrid) or historical figures (portraits of 12 Ottoman sultans on the map of Istanbul).

You can explore further  the Braun & Hogenberg's CityAtlas in our Digital Library, through links:

Two volumes (1st and 3rd) are now available in the Digital Library without computer processing, and all 6 volumes were shot  and prepared for printing by Alpharet Publishing House. The publisher, in addition to the facsimile edition of the famous atlas, also issued scientific comments, available in the Maps Reading Room.