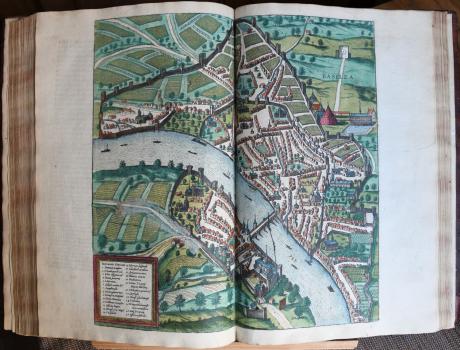 In the second half of the 15th century, cultural life of the cities of the Swiss Union was marked by rapid change. The Council of Basel of 1431-1449 carried Switzerland into the lead in the conciliar movement for the church reformation. The country became a center of attraction for intellectuals from all over Europe for many years. Therefore, the rapid emergence of new printing centers in the Swiss territories is not surprising. It was no less ten towns where print shops were established by 1500. The collection of early printed books of the National Library of Russia contains 221 Swiss incunabula, which make it possible to trace the evolution of printing in this region.

A city was considered a center of book printing, if it had 15 or more print shops, all operating simultaneously. In Switzerland, Basel became the major center of printing and publishing. From there, printing spread throughout the Upper Rhine region. The driving force behind the growth of printing was the presence of paper manufacturing in Basel (1453) and the opening of the first university in Switzerland in 1459. The university was a key place for collaboration between humanistic scholars, church leaders and printers. Religious texts and scholary works in Latin dominated the printing presses in Basel: the early printers published almost nothing in vernacular languages, and early printed books traditionally include Latin Bibles, liturgical texts, writings of the Church Fathers, books on canon law, and legal treatises.

The printing press reached Basel with Berthold Ruppel (died in 1494 or 1495), who had worked as a journeymen  in Gutenberg's shop to learn the craft of printing. Ruppel was the person who brought the new "black" technology to the city. After his arrival in Basel from Mainz, he set up his printing press in 1468. The earliest book he printed in the city was a two-volume Latin Bible (Fig. 1). The National Library of Russia possesses  a copy of this edition, decorated with multi-color ornate initials made by hand (Fig. 2, 3, 4).

Ruppel cannot be called a plentiful printer. He is known to have published about 30 books in Basel during his lifetime. This is likely because many of the early printers, including Ruppel, had to trade in paper to support themselves. Some books were published in collaboration with Michael Wenssler (c. 1445 - 1512) and Bernard Richel (d. 1482). They produced mainly religious works. These books feature elegant lettering (Fig. 7, 8, 8a) and high quality printing (Fig. 9, 10, 10a). Bernard Richel was the first of the Basel printers to use wood engravings and engraved initials. (Fig. 5, 6)

Another eminent pioneer printer, Nikolaus Kessler (c.1445 - c.1519), started his career with Bernard Richel.  He received the Bachelor of Arts degree in Basel. First he worked as a bookseller for the printer Bernhard Richel at book fairs in Leipzig,and married his daughter Magdalene. After the death of his employer Bernhard Richel in 1482, he took over his printing shop. Kessler also focused on Latin editions notable for skillfully executed ornaments. Especially famous is the second edition of the Letters of St. Jerome, the title page of which bears an engraving of Saint Jerome in a cell,  produced by Albrecht Dürer. This image was considered the earliest of the six known Dürer's prints of the saint, but at present the authorship of Dürer is being questioned. (Fig. 11а) 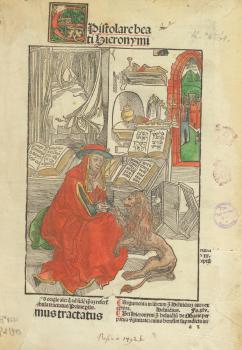 The Basel pioneer printers were, mostly, educated people from a near-humanistic environment. They were highly influenced by the growing scholarly tradition of the Upper Rhine region. It was in Basel that the cooperation between the humanists and the early printers was especially close. Unlike manuscripts and the earliest printed books, humanistic editions were carefully checked for accuracy before printing. Thanks to this, critical editions of historical works and Greek and Latin authors were provided.

The most influential figure among the Basel pioneer printers, who promoted the spread of ideas of humanism, was Johann Amerbach (c. 1440 - 1513). Johann was born into a noble family and received an excellent education at the University of Paris.  Amerbach earned the Master of Arts degree  under guidance of the German scientist, humanist and theologian, Professor Johann Heynlin (c. 1425 - March 12, 1496). This acquaintance identified Amerbach's further steps in life. In 1470, Heynlin and another Sorbonne professor Guillaume Fichet established the first French printing press in Paris.

Like many  early printers, Amerbach was an "itinerant printer" and did not immediately settled down in Basel. Amerbach studied the art of printing in Anton Koberger's print shop in Nuremberg, where he worked as a corrector. Shortly after his arrival in Basel in 1475, Amerbach began working under the name of Johannes de Venetiis. This may reveal Amerbach's links with Venice - another center of humanistic book printing.

Amerbach set up first humanist print shop in Basel. This means he mainly produced Latin-language literature for the intellectuals. In addition to theological writings and large-format Bibles, Amerbach also published contemporary Italian and German humanists, including Marsilio Ficino and Albrecht von Eybe (Fig. 11, 12). He was the first of the Basel printers to use the Antiqua type instead of the usual Gothic. Amerbach gained recognition by publishing greatly elegant books. He became exceptionally successful as a printer. This circumstance in many respects helped to form a brilliant humanistic group around Amerbach.  The group comprised many famous scholars and cultural figures: Professor Johann Heinlin, the philosopher and humanist Johann Reuchlin, the poet and doctor of law Sebastian Brant. 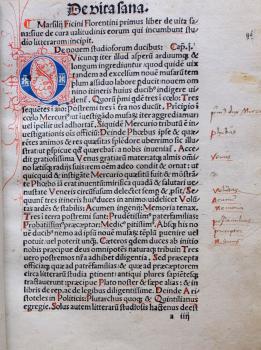 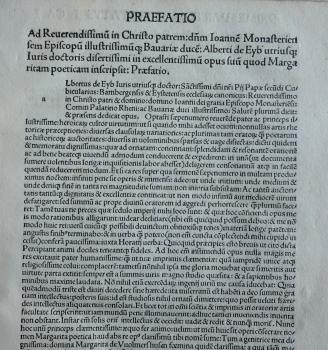 Interestingly, the humanists of the Upper Rhine region were ambivalent on the role of the printing press. Even Sebastian Brant doubted the benefits of printing. In his famous satirical poem Ship of Fools (German: Daß Narrenschyff ad Narragoniam), first published in German by Bergmann von Olpe in Basel in 1494, Brant criticises the printers as minions of heretics, who profit from reprinting dubious interpretations of the Scriptures and ignore the purity of language. He stated that printing led to the decline in the production of handmade books and prited books began to displace manuscripts. 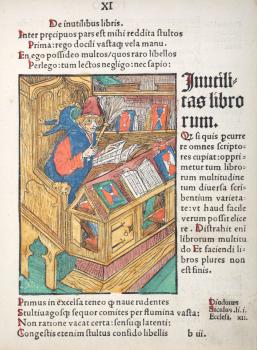 The Ship of Fools was translated into Latin (Lat. Stultifera navis) and published in the same printing house as the first German version. (Fig. 13). It is noteworthy that a little later, Brant glorified his compatriots, the inventors of printing, as enlighteners in his collection of Latin poems Varia carmina, published in 1498 by Johann Bergmann. Thus, despite the one-sided “business concept” of the emergence of book publishing, the printers who introduced book printing in Switzerland were active promoters of the scientific and religious Enlightenment at the pre-reformation age. 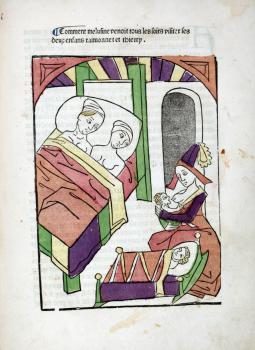 By the end of the 15th century, Basel was chalenged by Geneva which also joined the ranks of important centers of book printing.Adam Steinschaber, a native of Franconia, is credited with establishing the first printing press in Geneva in 1478. Unfortunately, it was short-lived and lasted only two years, but produced no less than twelve editions. Although most printed books (incunabula) of the 15th century were in Latin, this printer is significant  because he published half of his books in French not Latin. Especially remarkable among them is the first French edition of the novel about the good fairy Melusine by Jean Aras (1478). The book tells one of the most popular and mystical tales of the Middle Ages. The Geneva edition contains 63 full-page prints.They were reproduced with simplification from engravings carved by an unknown master a few years earlier for the Basel printing house of Riechel, which first printed a German translation of the tale by Thuringian von Ringoltingen (c. 1473/1474). Thus Steinschaber's  Romance of the Faery Melusine became the first illustrated printed book in French. The copy of this publication from the collection of the National Library of Russia is unfortunately incomplete. All prints illustrating the book are hand-colored (Fig.14).

It is worth noting that the name of Steinschaber is found in only three editions. One of them is a centenary calendar (1479) that contains  information about the co-participation of another printer, Heinrich Wirczburg (Fig. 15, 16) 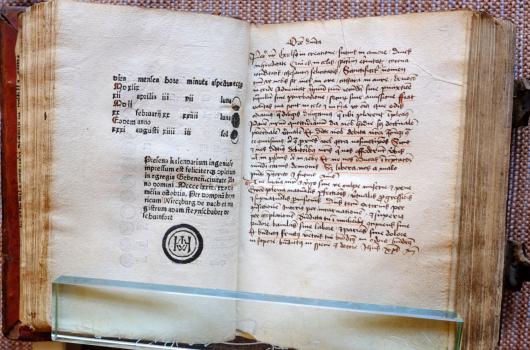 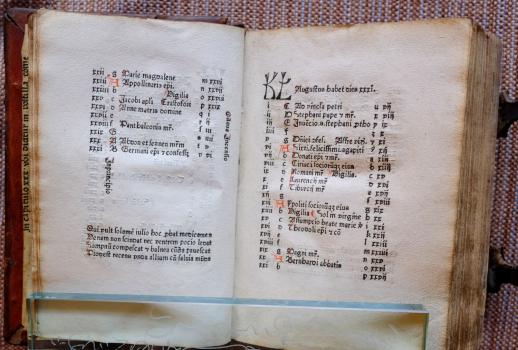 At the turn of the 15th-16th centuries, prevalence of the southwestern region as a book printing center becomes total. All the mentioned typographers were a product of  the time, and can be called "itinerant printers". The printers that followed them had a fixed place of business and did not move from one place to another. Significant pan-European structures were formed.

The most famous Swiss printer of European scale was Johann Froben (c. 1460 - 1527). Froben began training in the craft of printing in the Nuremberg  workshop of Anton Koberger. From 1490, he  worked as a corrector for the Basel printing press of Johann Amerbach. A year later, Amerbach entrusted him with an independent publication, and on June 27, 1491, "Johann Froben from Hammelburg" published his first book -  the complete Latin Bible (Fig.17, 18, 19). Froben printed the first pocket-sized octavo Latin Bible at Basel in 1491. This was the earliest printed Latin Bible of small format (an eighth of a sheet), which was extremely rare among printied Bibles. The book became a landmark for typographic art and had a significant commercial success. Froben also introduced an innovation to the second edition of this pocket-sized Bible, which was printed in 1495. The book was the world's first printed Latin Bible to include a woodcut illustration: the frontispiece of the book featured an engraving by Albrecht Dürer (Fig. 20).

Froben's partnerships with Johann Petri began in Amerbach's print shop: they published a fundamental six-volume Bible with commentary by the medieval theologian Nicholas of Lyra, edited by Sebastian Brant. Froben was in joint business with Johannes Petri and Amerbach, based in Amerbach's workshop, until he opened his own printing firm in 1507. With the death of his companions, in 1513 he inherited and headed both the firm and print shop.

Froben  adopted and evolved the business model  of his teacher and colleague Johann Amerbach. He succeeded to improve it so that his publishing strategy was continued by his heirs and shaped the development of printing and book culture in Basel for many years ahead.