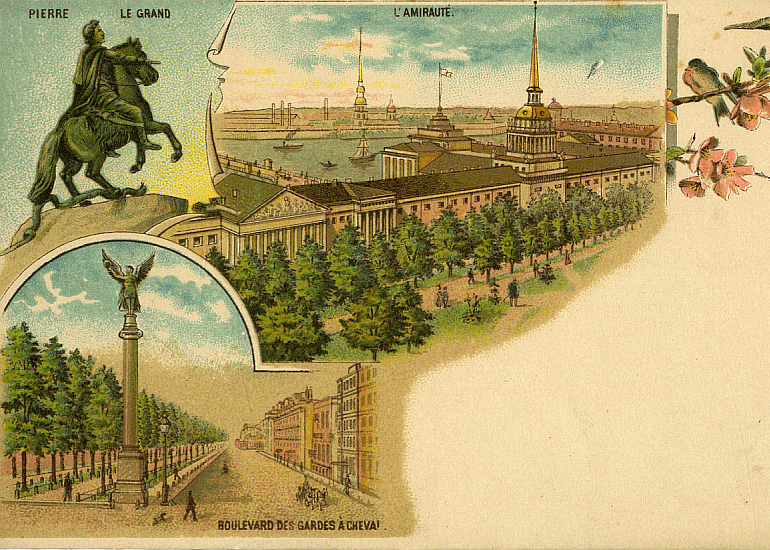 The first pictorial postcards were printed in different countries as a souvenir. They usually featured several local views together with an ornamental or floral composition. Their compositions were often comprised of multable images tied together with highly decorative graphics. The souvenir cards were often produced in series. These postcards almost always said "Greetings from...", that is why they are also called "Gruss Aus" ("Greetings from") postcards. “All currently known postcards of this type were published before 1900. They form the most valuable, historically and artistically complete part of the earliest souvenir postcards”, writes the celebrated collector and researcher V.O. Markov.

The city on the Neva first appeared on such a postcard in 1895, thanks to the Dresden publisher P. Saitmacher who also published postcards dedicated to Moscow. In 1896, a "Greetings from St. Petersburg" postcard was printed in Berlin by the art publishing company of Johannes Miesler (1851-1905). Born in the city of Wevelinghoven, Miesler was active in the capital of the German Empire from 1876. He was a pioneer publisher of colour (chromolithograph) "Gruss aus" ("Greetings from") postcards which were dedicated mainly to German cities - Berlin, Magdeburg, Dresden and others. At the turn of the 20th century, Miesler employed up to 100 people; the company's products, including greeting cards, calendars and posters, were sold even overseas - in the United States. Nevertheless, in 1904 the company went bankrupt, and the following year Miesler died in Schoneberg (now a district of Berlin). 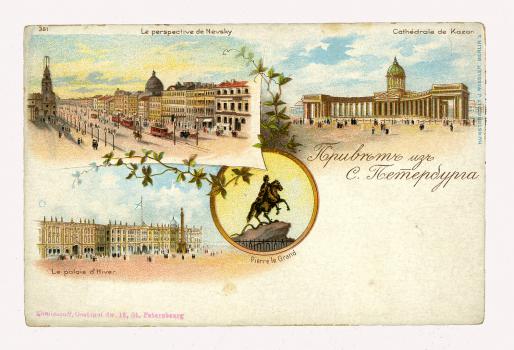 Nearly all of Miesler's postcards were numbered; the Petersburg one has the number 351. Four miniature images on the front of the card display the city's views, among them is Nevsky Prospekt seen from Gostiny Dvor. This view is of particular importance because the copy of the postcard kept in the National Library of Russia can tell the history of Gostiny Dvor - more precisely, one of its stores, in which two generations of St. Petersburg merchants successfully traded for about forty years.

Unlike other copies, at the bottom of the postcard there is not information about the publisher, but an overprint: “Komisaroff, Gostinoi dw. 16, St. Petersburg”. Vasily Kommisarov (c. 1837 - 1898) came from St. Petersburg burghers and from 1877 was a member of the merchant class. Already in 1878, the merchant of the 2nd guild Kommisarov kept a toy store in Gostiny Dvor along the Sukonnaya (now Neva) line, at numberat number 16. He always lived nearby: first in Chernyshev lane in the newly built house no. 2 (now Lomonosov street, house no. 16), then in house no. 13 along Leshtukov lane (now Dzhambul lane), then opposite Gostiny Dvor - in house no. 50 on Nevsky Prospekt, on the corner with Sadovaya Street. In 1896 - at the time when the merchant placed advertising information about his store on a postcard - he lived either on Kazanskaya street, at house no. 26 (at the intersection with Gorokhovaya street), or at house no. 55 on the Fontanka River Embankment near Chernyshev Bridge (now the Lomonosov Bridge). In 1898, after the death of V.A. Kommisarov, the trade passed to his widow Stepanida Grigorievna. In the 20th century, the toy store under V. Kommisarov's firm " continued to work in Gostiny Dvor: back in 1916, its co-owners were the sons of Vasily Avksentievich - merchant Pyotr Vasilyevich Kommisarov and personal honorary citizen Ivan Vasilyevich Kommisarov.

The first domestic series of souvenir postcards also dates back to 1896; its publisher is unknown. The National Library of Russia possesses two of the four postcards: one depicts St. Isaac's Cathedral and the Peter and Paul Fortress, the other can be considered a dedication to Emperor Nicholas I - it shows the Nikolaevsky (now Annunciation) bridge and an equestrian statue of the Emperor on St. Isaac's Square. 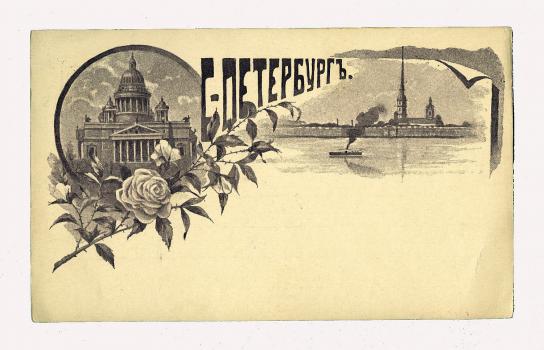 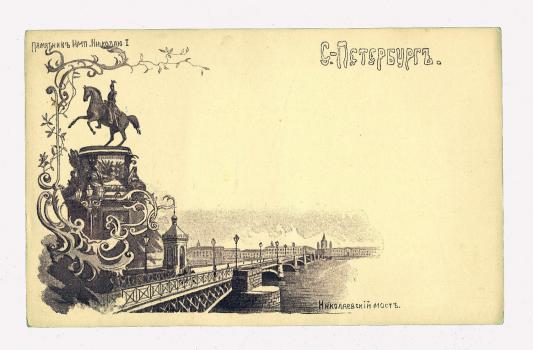 In the following year, 1897, the St. Petersburg publisher of German origin Richard Luterman Jr issued a souvenir series. The series of high graphic level is notable for excellent quality printing. Delicate watercolor tones, finely designed floral and ornamental motifs of the Art Nouveau style,- all this is perfectly reproduced in chromolithography. The series was considered as “the highest degree of lithographic art that aimed at the finest reproduction of a multi-colored original”. 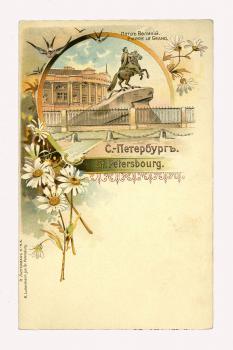 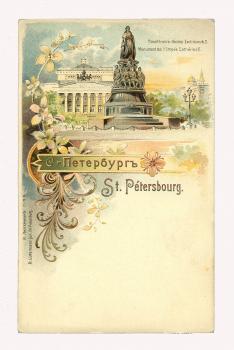 The All Petersburg Address Book for 1898 says about Luterman, who lived on Nevsky Prospekt in the apartment building of the Catholic Church of St. Catherine (house no. 32-34),“Papers goods and office supplies; a store and workshop of artificial flowers”. In the 1900s he also had a paper goods warehouse, and later ran a stationery store.

Lutherman started to publish postcards, presumably, in the late 1890s. At the turn of the 21st century, researchers found out that it was he who established the Richard publishing house. They wonder “why the German entrepreneur chose to write the company name in French instead of German, but this remains a mystery". The most likely, R.R. Lutherman spelled his name in the French fashion because he owned a factory and a warehouse of French flowers and greens. The publisher printed postcards that covered a wide range of subjects. The total number of postcards he issued is currently unknown; there were over 1,500 color art postcards alone. The company was closed during World War One with Lutherman's expulsion from Russia as a German national. 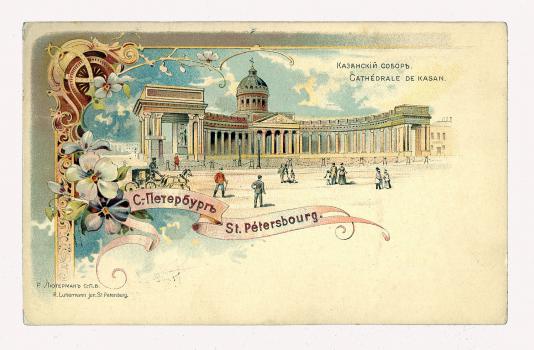 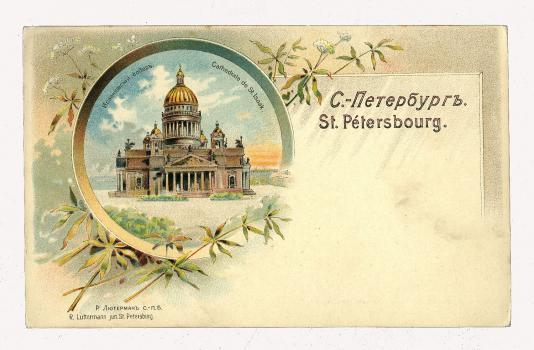 Unlike most souvenir postcards, each edition of Luterman features only one of the city attractions. Among popular are statues of Peter I and Catherine II, the Kazan and St. Isaac's Cathedrals, the Winter Palace and Nevsky Prospekt in the Gostiny Dvor area. In the latter image, assembled with buildings that have survived to this day, you can also see the chapel of the Transfiguration Monastery of Gostilitsy, which was located between Gostiny Dvor and the City Duma for more than half a century. This chapel, designed by Academician Alexei Gornostaev in the "Russian style" and consecrated in 1861, was demolished in 1929. 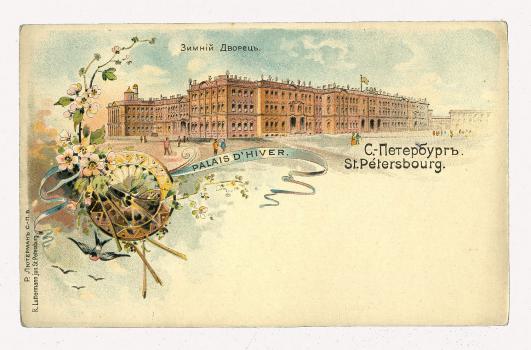 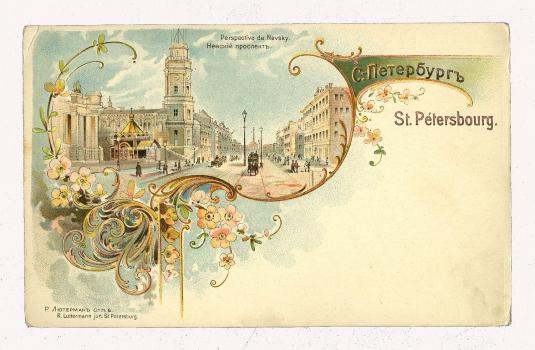 In the same 1897, a series of six postcards displaying views of St. Petersburg was issued by the the Granberg Joint Stock Company (Granbergs Konstindustri Aktiebolag) in Stockholm. It had been founded a year earlier when Carl-Gustav Granberg (1865-1923) took over the publishing firm in which he had worked since the mid-1880s. In subsequent years, until the outbreak of World War One, Granberg's company carried out numerous orders from Russian publishers, and he himself visited Russia on several occasions. 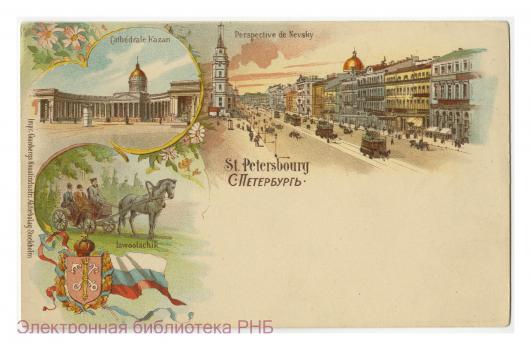 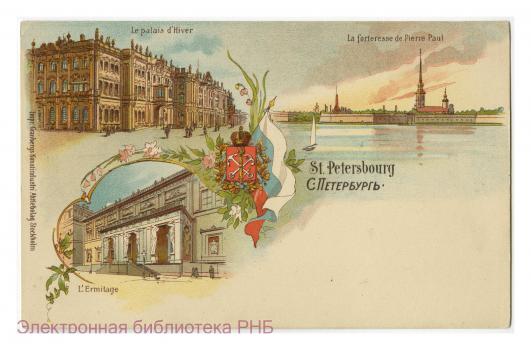 A distinctive feature of the 1897 series, which was then reprinted over the next two years, is the coat of arms of St. Petersburg and the tricolor Russian flag, included in compositions from recognizable capital sights. Two postcards show ethnographic scenes with vehicles: "Troika" (Russian three-horse driving combination) and "Cab Driver" ("Iswostschik").

Some postcards from the collection of the National Library of Russia are overprinted “E. H. Deesler, 28 Karavannaja”. It is evidence that part of the edition of this series was printed by order of the St. Petersburg merchant of the 2nd guild, Ernst Hugo Deesler (c. 1840 – c. 1903?). The Prussian citizen Deesler was a merchant since 1868. He then lived on Nevsky Prospekt in the house of the Dutch Church (house no. 20), in which he sold paintings and tobacco. By the end of the 1870s, Dezler moved to house no. 71 on the Moika River Embankment (near the Red Bridge, at the intersection with Gorokhovaya Street). Here he also traded paintings and tobacco and then, from the beginning of the 1880s, only paintings. 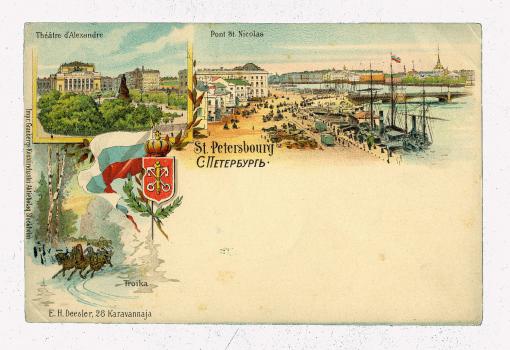 15. By 1894, Deesler lived on Bolshaya Morskaya Street, house number and ran two shops: near the Red Bridge and on Karavannaya Street, house number 28/66, at the intersection with Nevsky Prospekt. They offered paintings and watercolors, as well as photographs and oleographs), writing and stationery, as well as a variety of art supplies and interior items: “For painting, burning, and other art works: devices, paints, brushes, models, drawings, glass, wood, metal, and leather things. Terracotta from 15 kopeсks up to 40 rubles: vases, mugs, figures, busts, dishes, brackets, etc. Frames of all kinds”. By the beginning of the 20th century. Deesler had the only “shop of paintings, frames, baguettes and terracotta"; in addition, he owned a “frame factory” on the same Karavannaya Street. From 1904, Ernst Gugonovich Deesler began to sell paintings on Karavannaya Street at 28/66; perhaps this happened after the death of Ernst-Hugo Desler.

In 1897, a large series of ten postcards depicting St. Petersburg was printed in Germany. It was published in Leipzig by Louis Glaser (1842‑1911), a publisher and an owner of a lithographic workshop. He began publishing in 1868. First he did business with a partner, and in the early 1880s, set up his own company. In addition to postcards, he published many landscape albums. 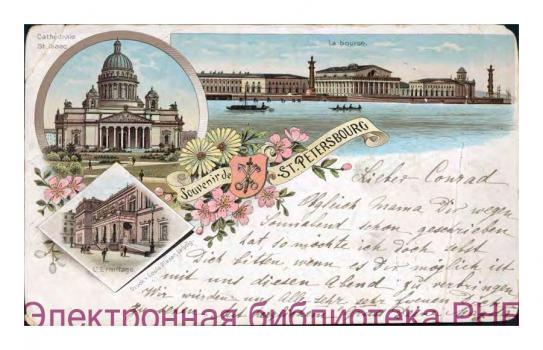 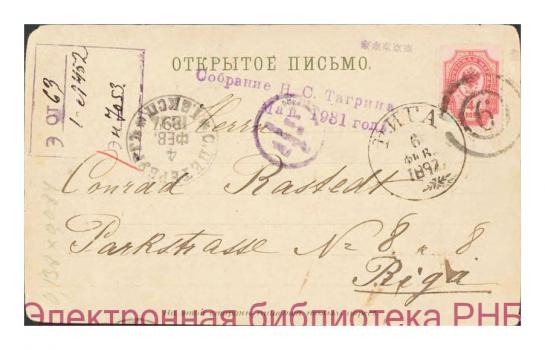 A postcard from this series, kept in the National Library of Russia, was addressed to Conrad Rastedt, who lived in Riga on Parkstrasse Street (probably this is the current Alfred Kalnin Street in the Latvian capital, until 1951 it was called Park Street). In 1897, in two days, from February 4 to February 6, she made her way from St. Petersburg to Livonia, in order to then return to St. Petersburg - Leningrad as an object of collecting.

The owner's stamp “Collection of N.S. Tagrin, May, 1931” was put on the address side of this postcard by Nikolai Tagrin (1907‑1981) (1907‑1981). He was a resident of St. Petersburg, began collecting postcards in 1922, and two years later, by the time he graduated from school, his collection numbered about 4,500 copies. After graduating from an economic college in 1926, Tagrin was admitted to the 2nd year of the Composition Department of the Leningrad Conservatory and at the same time studied at the Music Department of the State Institute of Art History. He graduated from the Conservatory in 1931, the Institute of Art History - a year earlier.. In 1935 Tagrin joined the Leningrad Society of Collectors, and in 1945 his collection of postcards was taken under state protection. Since 1958, he was the head of the Leningrad club of philocartists.

Tugarin is the author of numerous speeches and publications dedicated to postcards. The collector eventually built up the largest collection of postcards in the USSR, which has been held in the Museum of the History of St. Petersburg since 1982 and contains over 570,000 items.