A digital library of the Map Department was added with a collection of nautical charts of the 17th century by the outstanding Dutch Golden Age cartographers and publishers Willem Janszoon Blaeu (1571−1638), Frederick de Wit (1629−1706), Hendrick Doncker (1626−1699), Jan Jansson 1588−1664). These are small-scale overview navigation charts that do not contain detailed information, but only selective data on coastal and maritime geographical features, such as mountains and plains, the shape and contours of the seafloor. 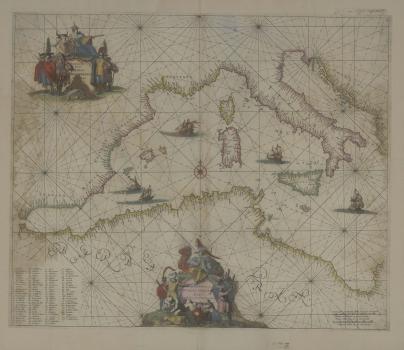 Like their predecessors, early portolan charts of the 13th-16th centuries, they have navigation aids, including windroses and rhumb lines showing the direction of compass points, and have not always been oriented north. Objects important for navigation are meticulously drawn on the map with special care: settlements, islets and stretches of the rivers, ports, capes and bays, rocks and shoals, water depths, coast relief. The inland show a few elements of political geography: the names of continents and states, coats of arms and flags. The water bodies are decorated with images of sea monsters and ships of European and Eastern seafarers, scenes of naval battles. The history of wars and long voyages is read within cartouches framing the titles. In them, mythological characters coexist with European travelers and residents of overseas countries. Indexes and scale bars are often used in drawing a map.

The presented maps were produced during a special stage in the history of cartography and in the history of the Netherlands - the Dutch Golden Age 1, the heyday of industry and trade, sciences and arts. The northern provinces of the Netherlands, liberated from the rule of Spain, formed the Republic of the United Provinces, which was also called Holland after the name of the most important province. 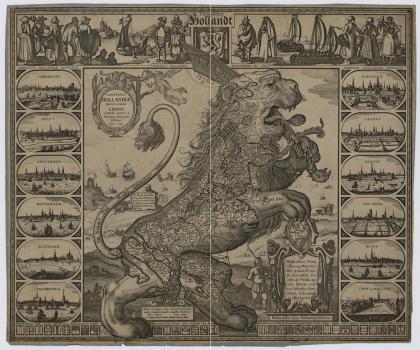 In the 17th century, the Republic became the most urbanized country in Europe and quickly reached the peak of economic and cultural growth. Holland flourished as a center of trade, located at the intersection of several major Western European routes. Dutch prosperity was built also upon cheap energy from windmills and peat, an extremely advanced maritime and overland transportation systems, adherence to a strong Protestant work ethic, ample opportunities for entrepreneurship and scientific activity, a developed financial and credit system. All industries were highly developed (especially food and textiles, and related industries), but shipbuilding and the production of navigational instruments became the leading ones. In the 17th century, Holland had the largest marine in the world, that surpassed the fleet of any country in the number of ships and tons of shipping. The Dutch shipyards also received many commissions from international owners of vessels, including English and Spanish shipowners. (Comitatus Hollandiae denuo forma Leonis curiose editus a Nicolao Johannis Visscher. - [Amstelodam], 1648. Map of Holland in the Form of a Lion (К 0-Цев 2/304)).

Thanks to economic prosperity, the Netherlands become the leading trade power in the world. Mediation services brought the greatest profit to the Republic. Already in the first half of the 17th century, it dominated almost all European and intercontinental trade. To control profitable intermediate commerce of colonial products (coffee, tea, sugar and extremely highly valued spices in Europe - cinnamon, pepper, cloves, nutmeg), the Republic founded fortresses and trading posts in West Africa, in North and South America, in the Caribbean, in Southeast Asia, driving the Portuguese and the British out of there. To protect trade and exploit territories in the Eastern Hemisphere, the Dutch East India Company was established, the West India Company – in the Western Hemisphere. 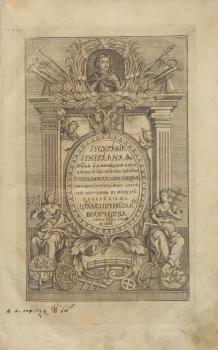 Political independence and economic prosperity were matched by the flourishing of culture. Scientific and religious freedom made the country a magnet for scientists and students from all over Europe. Philosophy and jurisprudence, philology and medicine, exact and natural sciences prospered in the new universities. Sciences contributed to technologies which became embodied as technical inventions. Geographic works, sailing directions and descriptions of travels reached new heights. The most important among the Dutch geographical works is considered to be the Geographia Generalis by the German-born scholar Bernhardus Varenius: (1622−1650).

Due to the significance of his Geographia Generalis (1650), Varenius is known among the founding fathers of modern geography as a science. He systematized knowledge about the Earth and payed special attention to mathematical facts, physical laws and astronomical calculations. Varenius was the first to divide geography into ‘general geography’ and ‘special geography’, define the goals, contens and methods of geography as a separate science. His work was published first by Elsevier Press in 1650 and then went through many editions and was translated in many languages. Over the second half of the 17th century and throughout the 18th century, Geographia Generalis held its position in Europe as a classic text on physical geography. (The Digital Library of the National Library of Russia contains Geographia Generalis translated in Russian). 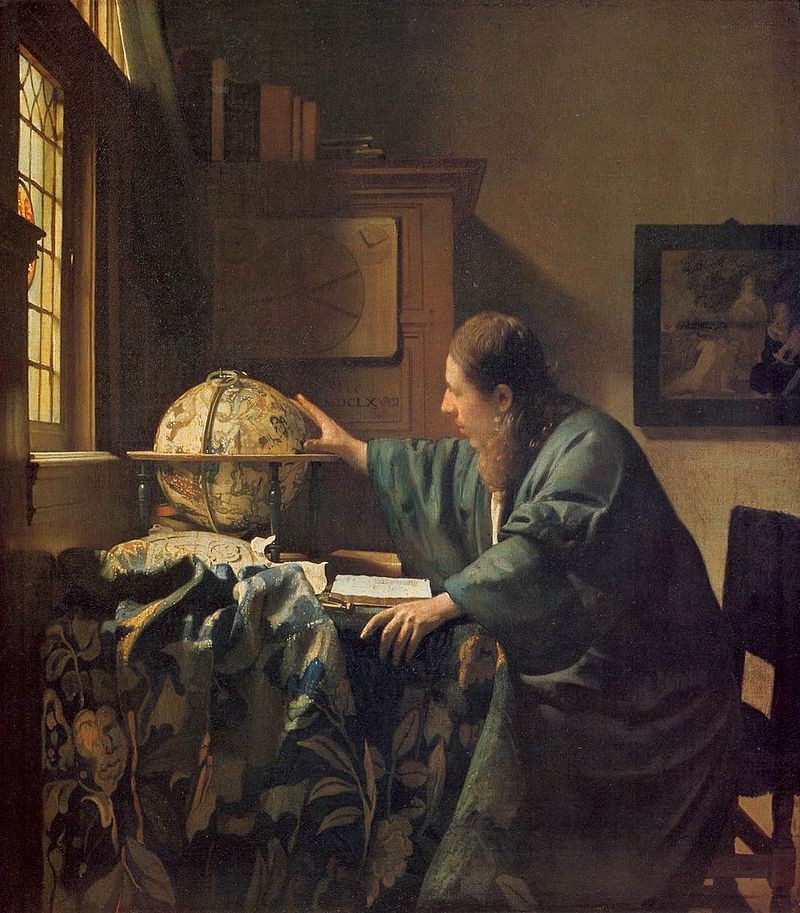 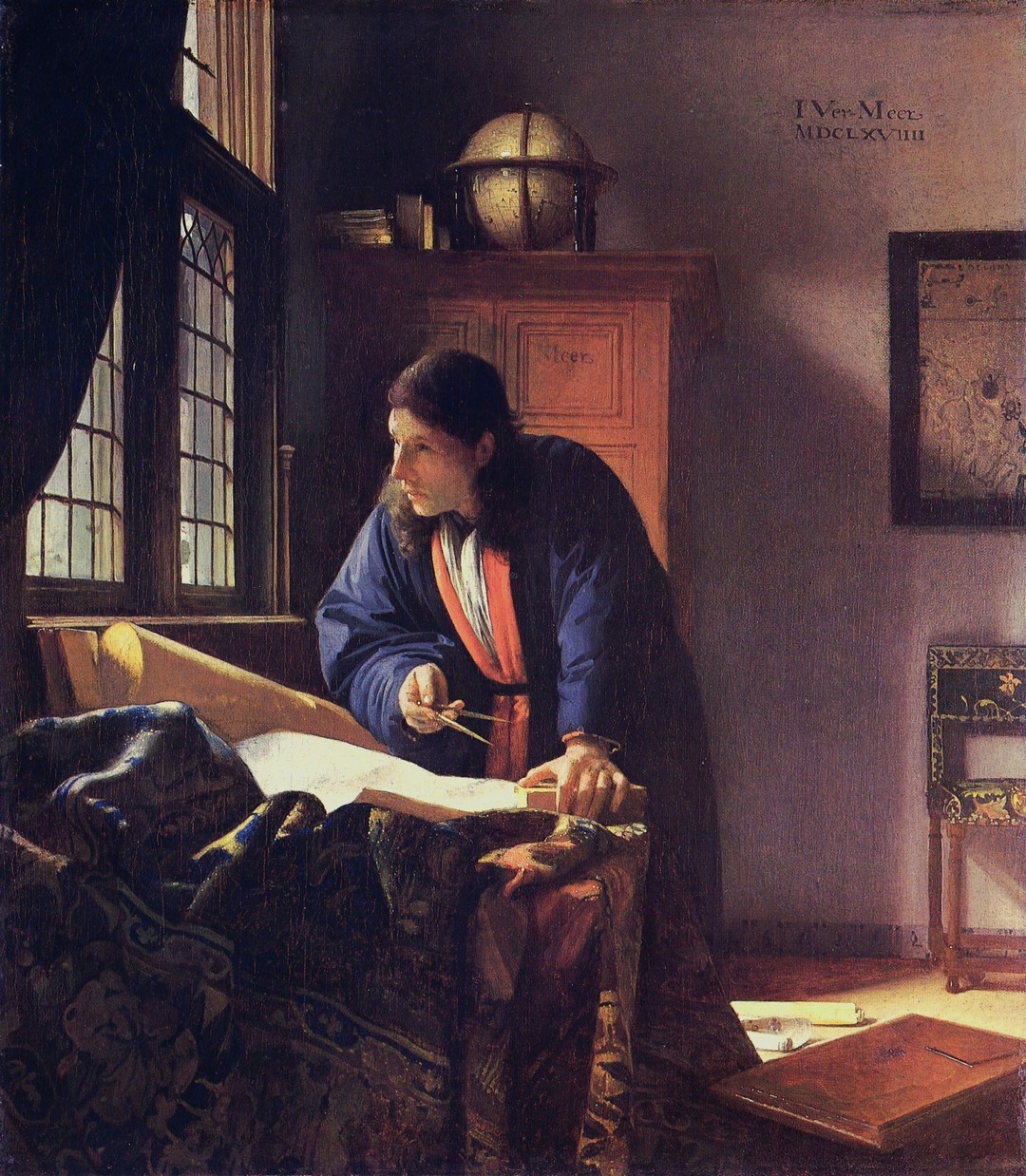 Spreading geographical knowledge and pushing the boundaries of the known world was naturally followed by the intensification of cartographic production. Amsterdam became the world center for map printing. Maps and globes, as vivid signs of the times, appear in paintings, including Astronomer (1668) and Geographer (1669) by Johannes Vermeer.

Due to inadequate development of heavy industry, lack of resources and military defeats, the Netherlands will lose its leadership role at the end of the 17th century. Despite this, maps and works on navigation will never lose their historical significance and will always rank among the achievements of the Dutch Golden Age.

Exhibited maps are also considered the cartographic masterpieces of the 17th century. Based on them, we can draw the most important trade routes of the adventure Dutch in the Mediterranean, Atlantic and Indian Oceans:: 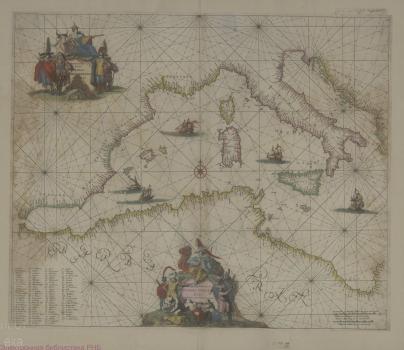 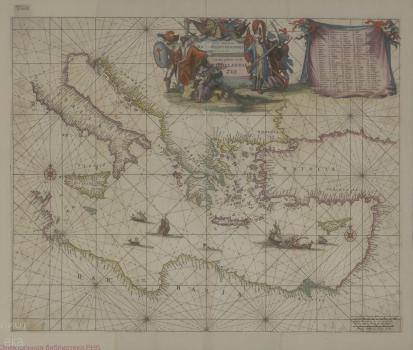 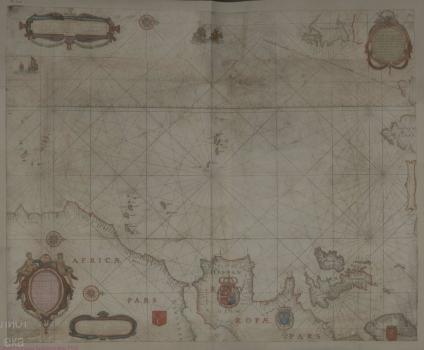 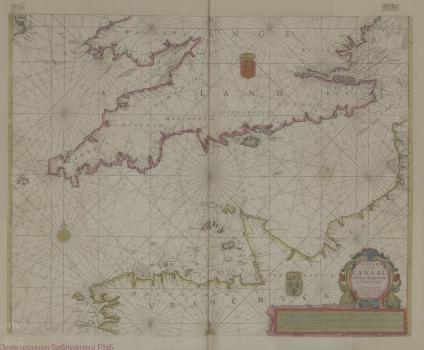 Hendrick Doncker's chart showing the English Channel with the adjacent coasts of southern England and the coast of Brittany and Normandy. 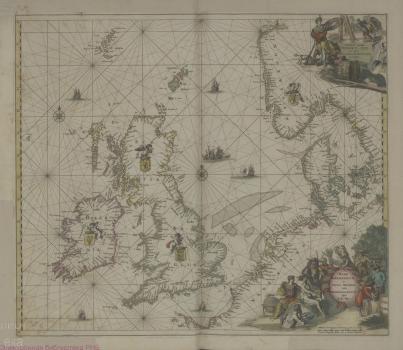 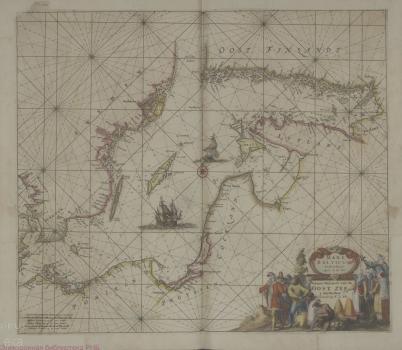 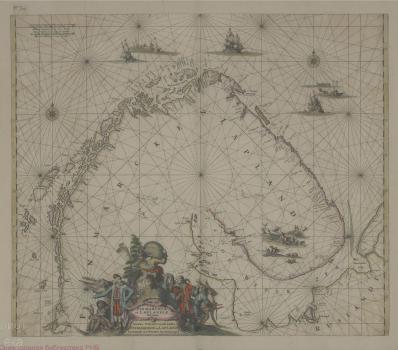 Frederick de Wit's sea chart showing the coasts of Norway and Lapland (the Kola Peninsula) to the Kanin Peninsula. 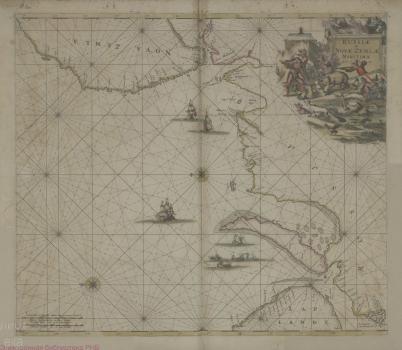 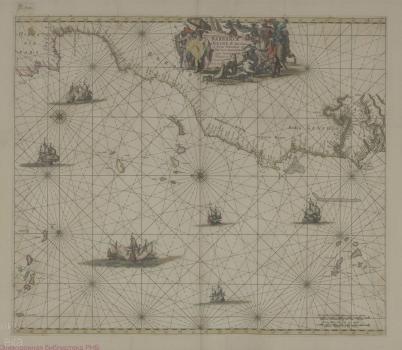 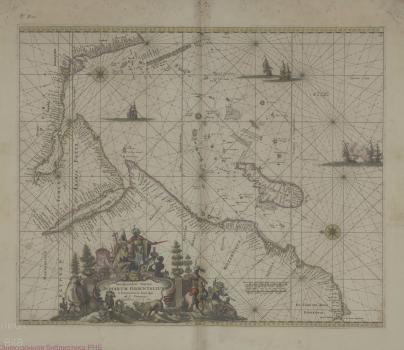 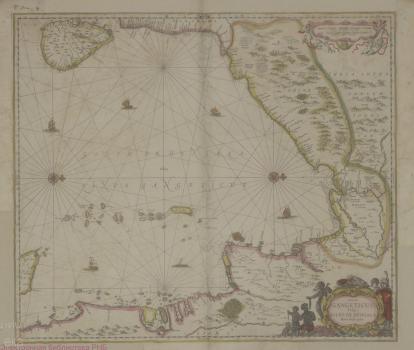 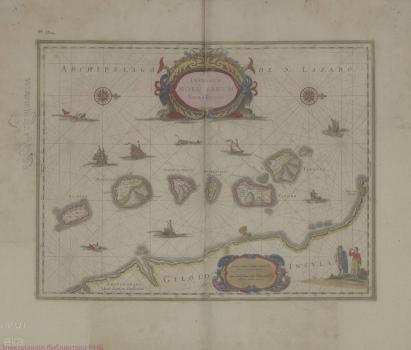 Jan Jansson's map of the Moluccas, the modern day northern Maluku islands of Indonesia, showing the islands off the western coast of the largest island of Gilolo (Halmahera). 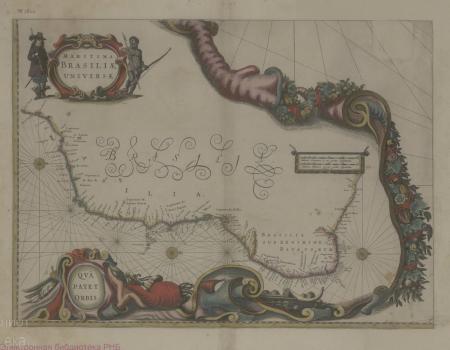 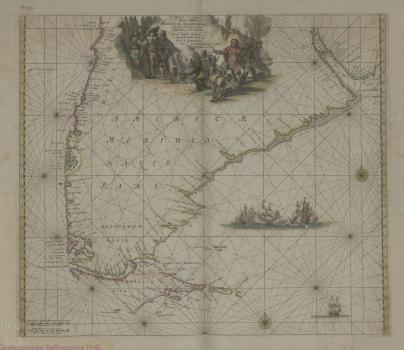 Frederick de Wit's sea chart showing Argentine and Chilean coasts from Rio de la Plata to the Strait of Magellan and the Valparaiso region of Chile. 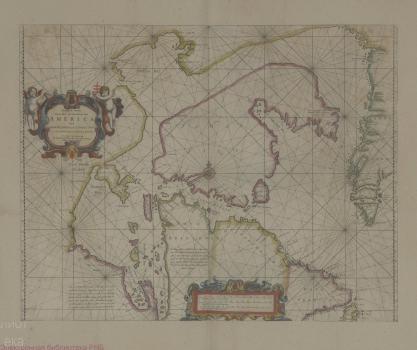 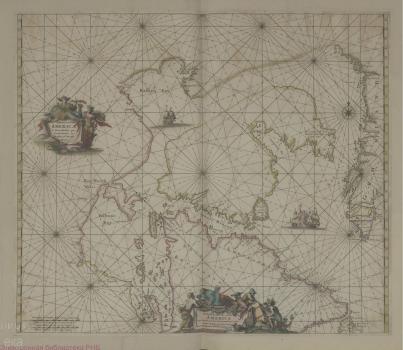 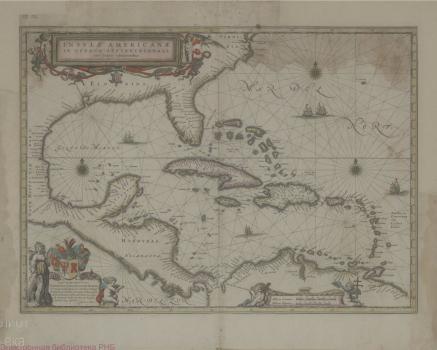 Willem Janszoon Blaeu's sea chart depicting the coasts of the Gulf of Mexico, the Caribbean Sea and part of the Atlantic Ocean; Part of the Pacific coast of Central America is also shown.