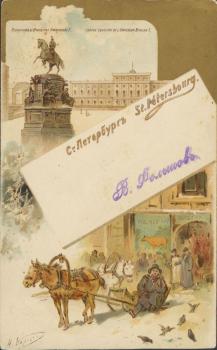 Picture cards of views of Russian cities appeared in 1895. Winter-in-St.-Petersburg-city postcards were first published by the merchant Otto Kirchner (1848-1901) in 1898. After his arrival from Germany in the early 1870s, Kirchner started his bookbinding workshop. A quarter of a century later, he also opened a store of account books that he manufactured in St. Petersburg. Otto Kirchner was a member of the Russian Society of Booksellers and Publishers1. The series printed by him 1898, consisted of ten souvenir postcards. Each card provides an interesting composite image of St. Petersburg. Four of them show the city's winter scenes and townspeople. The postcard titled St. Petersburg. Statue of Emperor Nicholas I is among the most prominent.

This series was designed by Nikolai Karazin (1842-1908), a writer and watercolor artist who frequently worked as an illustrator. O. Kirchner's publication was not the only Karazin's experience in the field of the postcards – a new form of graphic art at that time. In the same year, he made watercolor paintings for the first postcards by the Community of St. Eugenia, a publishing house and a subsection of the St. Petersburg Committee of the Red Cross. In 1899, the artist drawn Siberia Postcards Series was printed by the Association of Kyakhta Tea Merchants "Jin-Long". After the turn of the next century, in 1902, A. Levenson printed souvenir postcards inspired by Karazin's views of Moscow.

In 1899, St. Petersburg winter postcards were issued in Stockholm by the Swedish Granberg Society printing company that primarily served Russia. One series depict not only the snow-covered capital at night, but also views of other cities of the Russian Empire. The capital's popular attractions – statues, cathedrals, chapels – were captured not by an artist, but by a photographer who did not shoot in winter or at night. The postcard collector V.O. Markov explains, “a method of changing real photo postcards of St. Petersburg into nighttime winter scenes was adding dark blue tint and painted snowdrifts and a starry sky with a full moon to a print”2. The "moonlight effect" was invented by masters of photography in the last third of the nineteenth century. For instance, toning and the moon in the sky turned daytime photos of Venice3 into nighttime ones.

In 1907, another Stockholm publisher of postcards, Ernst G. Svanström, issued a set of ten nighttime scenes of winter St. Petersburg. Some of the postcards from this series display the same city's views that Granberg had chosen: St. Isaac's and Kazan Cathedrals, statues of Peter the Great and Nicholas I. But the cards by Ernst G. Svanström are unique because they were manufactured with hand coloring.

Not night, but a bright sunny day in St. Petersburg is shown on a postcard by an unknown artist, printed by the publishing house of Ilya Seferiades. You can see the main thoroughfare of the capital – Nevsky Prospekt, the perspective of the right side of the avenue from its intersection with Sadovaya Street to the Admiralty. The composition includes a fragment of the building of the Imperial Public Library, the huge department store Gostiny Dvor, the tower of the City Duma (сity сouncil). At the time the postcards were published, tram routes along the street were no longer news for the city. Trams first ran along Nevsky Prospekt in 1907, and the postcard was published not earlier than 1911, judging by the address of the publishing house. In the address, the name of the city "St. Petersburg" is covered by an ink overprint "Petrograd"(St. Petersburg was known as Petrograd from 1914 to 1924). We can conclude that the postcards printed not later than 1914, continued to be sold during the First World War. 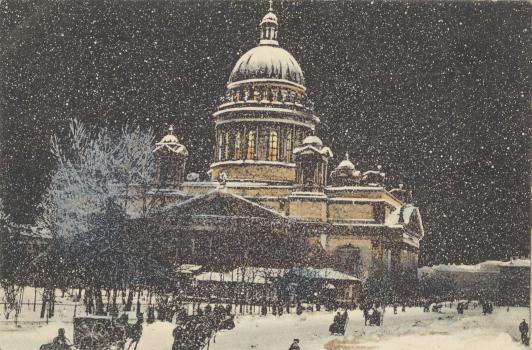 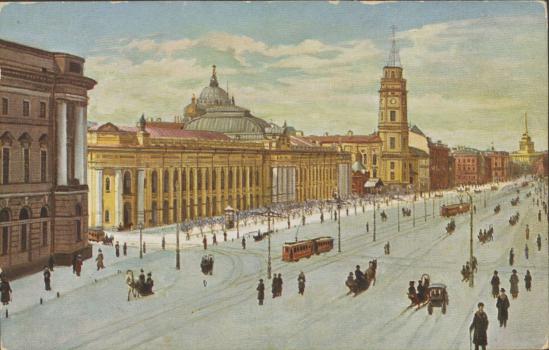 The perspective view of the snow-covered Nevsky Prospekt, seen from the intersection with Sadovaya Street, was also depicted by the landscape painter Alexei Prokofiev (1867‑1925). He studied at the Drawing School of the Society for the Encouragement of Arts, then at the Imperial Academy of Arts with the famous artist  Arkhip Kuindzhi. Almost fifty Prokofiev's landscapes were reproduced on the postcards by the Richard publishing house. One of the largest publisher in St. Petersburg, it was founded by Richard  Luterman (junior) at the end of the 19th century. Not later than 1906, he began to publish color art postcards, which were printed mainly in the R. Golike and A. Vilborg Partnership, one of the best Russian printing houses.

St. Petersburg. Winter Palace is one more example of Prokofiev's work which appeared on the postcard by Richard company, In its background, there is the fence of the Private Imperial Garden, installed in 1901 on the Palace Embankment and dismantled in 1920.  Even more interesting, you can see the rails laid across the frozen Neva for the ice tram that ran in the capital from the winter of 1895 to the winter of 1911. The artist captured one of these routes launched in the very first year: from  the Winter Palace Pier to the Mytninskaya Embankment. 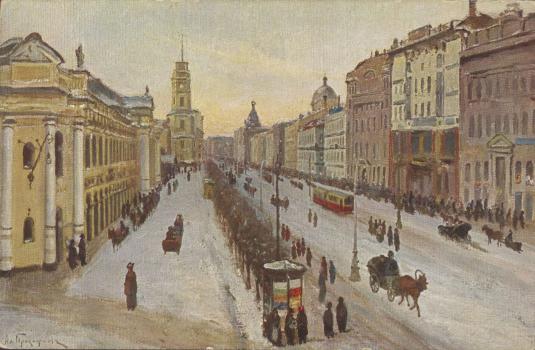 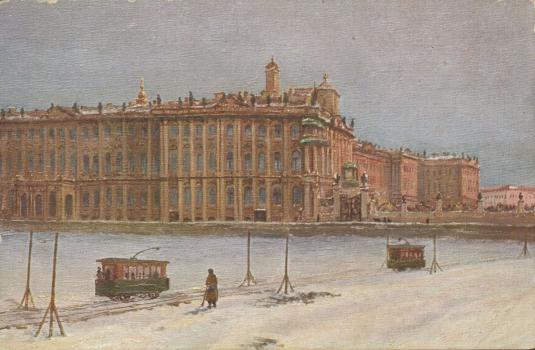 Grigory Kalmykov (1873‑1942) is another pupil of A. Kuindzhi whose landscapes were willingly reproduced by the Richard publishing house. Born in Kerch, he studied at the Odessa Drawing School and then at the Academy of Arts in St. Petersburg. The postcard  St. Petersburg. On the Bank of the Neva depicts a view familiar to every student of the Academy. It is seen from the main entrance to the Academy: the granite quay decorated with two Egyptian sphinxes and background buildings of the English Embankment with St. Isaac's Cathedral towering behind it. Enveloped in frosty air, a granite statue brought from Egypt is lit by the winter sun and covered by snow, not by the desert sand. This postcard was obviously popular: first printed no later than 1911, it was reprinted in the second half of 1916.

The Richard publishing house issued almost fifty art cards designed by Georgy Kalmykov, but reproduced just over ten works by Albert Benois (1852‑1936. One of the founders of the the Association of Russian Watercolor Artists, Academician of the Imperial Academy of Arts, an author of numerous landscapes, from the 1880s, he lived in a family mansion on the corner of Ekateringofsky Prospekt (now Rimsky-Korsakov Prospekt) and Glinka Street. Not surprisingly, a watercolor painting by Albert Benois, reproduced by the Richard company, depicts the St. Nicholas Naval Cathedral opposite his house. 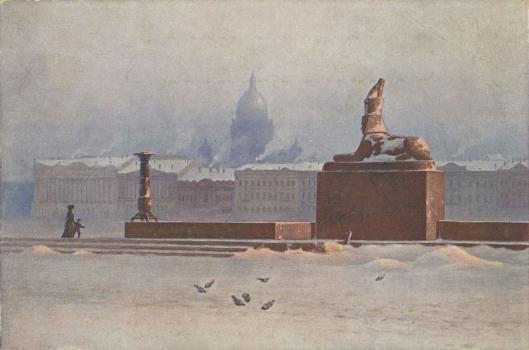 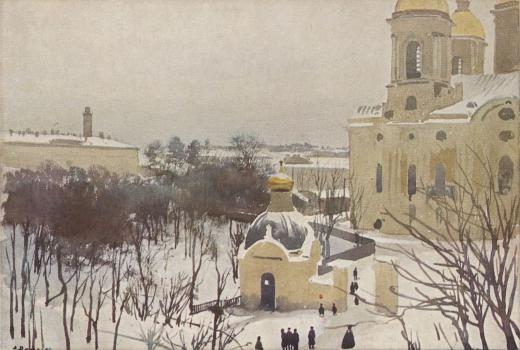