"For the knowledge of all the people": engravings of the time of Peter the Great in the collection of the National Library of Russia. Marking the 350th anniversary of Peter I 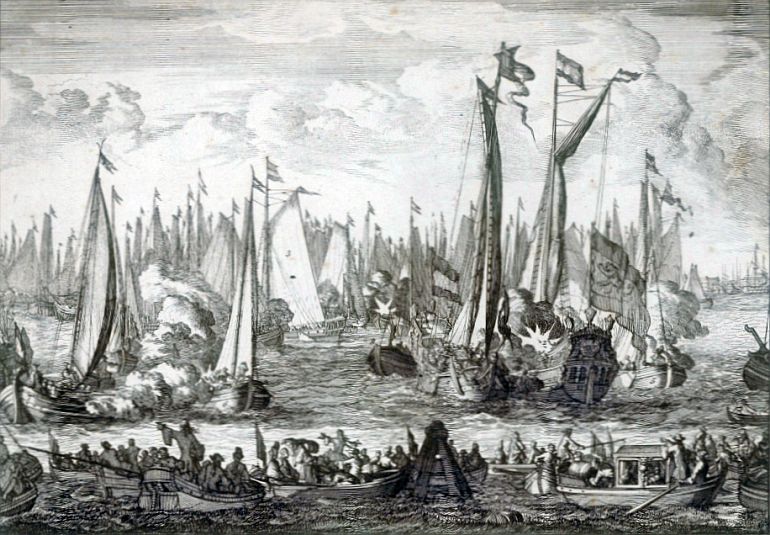 To mark the 350th anniversary of Peter the Great (1672-1725), the National Library of Russia presents an exhibition dedicated to the great reformer. Visitors are invited to reflect on one of the facets of his personality through the prism of such a Russian artistic phenomenon  as engravings.

While traveling in western Europe as a member of the Grand Embassy (1697-1698), Peter the Great adopted the best European practice. He paid particular interest in printmaking as a powerful agent for distribution of political information. Accompanied by text, engravings portrayed current Russian and foreign political events in a positive light for policy-makers. They influenced public opinion, created the picture of a successful ruler or a prosperous state.

Upon his return to Russia, Peter I began to develop printmaking. He initially made this art form a matter of State policy. Peter the Great was closely involved in efforts to find and hire engravers. He personally commissioned and supervised the production of engravings on certain subjects, controlled their distribution, as evidenced by the exhibited documents written by Peter the Great.

The first victory of Peter, the capture of the Turkish fortress of Azov, which crowned the Second Azov campaign of 1696, is featured on an engraving by the Dutch printmaker Adrian Schonebeck who served for Russia from 1699. The work has an important propaganda value. It was designed for comprehension by the European public. This is evidenced by the bilingual text in Russian and Latin, which expands the reach of the audience.

Peter the Great understood the need for not only ongoing military and political information, but also for counter-propaganda. The defeat of the Russian forces near Narva at the beginning of the Northern War became widely known in Europe thanks to an engraving published in Germany, which is shown at the exhibition. This may have led to Peter's emphasis on depicting the first major success of this war – the capture of the Shlisselburg fortress (Oreshek, Noteburg) in 1702. The emperor personally wrote an explanatory text to the engraved image of the Russian army's victory. He personally sent the engravings to the mayor of Amsterdam, whom he met during the Great Embassy, and to the envoy of Russia in Constantinople..

Engravings, often accompanied by parallel texts (in English and Latin, German or French), informed Russia and Europe on the establishment of the Russian Navy and its victories.

Peter I took particular care to his new capital – Petersburg, founded on May 27, 1703. The city first appeared on an engraving The first view of St. Petersburg made by Pieter Picart in 1704  The monumental panoramic view of St. Petersburg, created by Alexei Zubov in 1716, is shown at the exhibition exactly as it was presented to Peter I in 1717, together with the only surviving copy of An encomium to glorify St. Petersburg and its founder, Emperor Peter the Great by the Navy ober-hieromonk, later Bishop Gabriel (Buzhinsky).

It is difficult to imagine engravings of the time of Peter the Great without depicting battles and military triumphs. So, one of the most famous victories of the Petrine era is the Poltava battle won by the Russian army. You have the opportunity to see this battle through the eyes of two opposing sides: the engraving by Nicolas de Larmessen reflects a point of view of the Russian forces, and the Dutch Victory of the Muscovites over the Swedes is a Swedish view of this event.

Alexei Zubov's Battle near Gangut is brilliant to describe dynamics, a drama of the battle and a premonition of the first major naval victory. The exhibition also features a rare German silk print engraving, dated 1720, showing fireworks on the occasion of the Grenham victory. No less solemn was the celebration of the end of the Northern War. A significant number of engraved sheets were produced on the occasion of the Peace of Nystadt in 1721. During the reign of Peter the Great,  military triumphs and successful innovations were reflected in prints, reinforcing the new image of the country as an empire.

Printmaking, which existed in Russia from the 16th century, received a new development in the Petrine era, becoming a matter of State policy. Thanks to outstanding masters, Russian engravings of the first quarter of the 18th century became not only a significant historical source, but also an integral part of the world cultural heritage.

The exhibition was prepared by D.V. Soloviev, A.F. Esono. Photos are taken by O.S. Golovin.