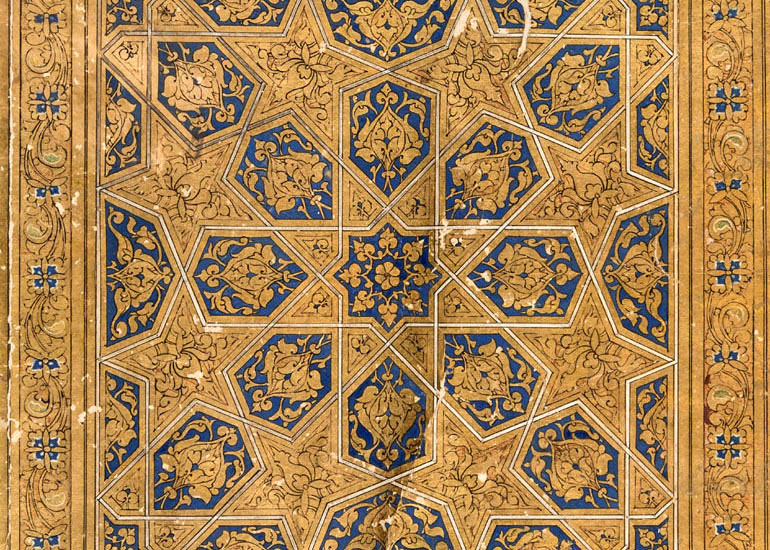 History of the Collection

Illumination of the Quran

Arts of the Manuscript Book

The Quran is the Holy Book of Moslems, a revelation that was given to the Arab prophet Muhammad by God in the 7th century. A final standard version was established during the reign of the third of the "Rightly Guided Caliphs" Uthman bin 'Affan between 644 and 656. The Quran laid the foundations of a new religious and cultural community — the Islamic society.

Since the emergence of Islam, the best scribes and artists have been commissioned to copy and decorate the Quran. For Quran manuscripts, they used durable materials of fine quality. The earliest copies of the Quran were written on parchment at the late 7th century in the Hijazi script, the writing style originating from the Hejaz region on the Arabian Peninsula. Early Qurans had vertical formats. They were imposing in size, but very modest in design (Fig. 1). Starting in the 8th century, Quran manuscripts began to be decorated with gold patterns, headpieces, vignettes (Марс. 13).

Quite early, the group of scripts were designed specially for the Quran. The calligraphic scripts of the early period spanning the rule of the Umayyad dynasty in Damascus and, particularly, the Abbasids in Baghdad, were angular, stately and formal. Cursive letters were not considered suitable for copying the Holy Book. Until the end of the 10th century, Quran manuscripts were writen on parchment, very expensive material. The value of the sacred text was emphasized by the fact that scribes consumed costly parchment without any economy. Each folio in these Qurans contains only few lines of calligraphy and wide margins (Fig. 2). The Qurans of the Abbasid time, as a rule, had horizontal formats unlike books of other content. 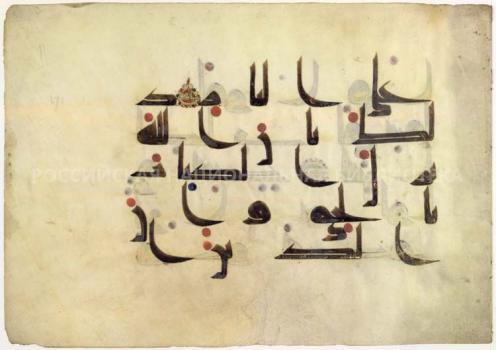 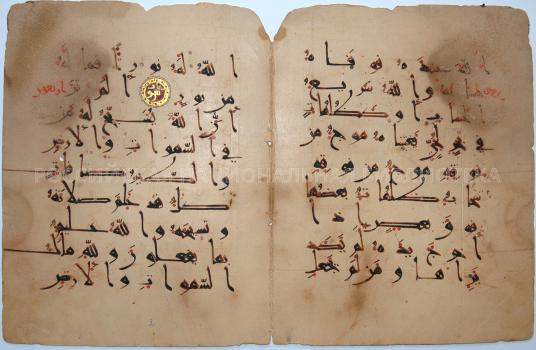 In the 10th century, the Quran began to be produced on paper, which was introduced into the Muslim regions from China in the mid 8th century. For some period, parchment and paper were both concurrently in use, but gradually the new economical material largely replaced expensive parchment. The 10th century Qurans were different from earlier manuscripts. They employed the "New Style" handwriting, sometimes referred to as "Eastern Kufic" or "Broken Cursive", or "Late Abbasid". The formats of the Quran manuscripts went from horizontal to vertical (Fig. 3).

By the 12th century, six major writing styles were developed that formed a calligraphic system. There were strict rules of shape and proportion of letters and their parts to each other. These six proportional scripts were canonized as classic and are known as the Six Pens. Some handwritings, for example, Muḥaqqaq and Rayhan were almost exclusively applied for transcribing the Qranic text (Fig. 4–5). Literary and scientific texts were calligraphed in Naskh or similar scripts. Since the 16th century, calligraphic Naskh has become the preferred script used for copying the Quran (Fig. 6).

Already early Quran manuscripts had decoration features that differentiated them from other books and made Qurans easily recognizable. The decorative elements were used primarily to guide a reader through the manuscript. They indicated chapters and other divisions in the text.

The Holy Book of the Moslems is composed of 114 chapters of varying length, called surahs. Each surah consists of 3 to 286 verses (ayahs). The Arabic word ayah means "sign", "evidence". Surahs are named by their theme or a word that occurs in the chapter. The first surah (chapter) is called Al-Fatihah ("The Opening") and consists of 7 verses. The following surahs are ordered from longest to shortest. The Quran's chapters are divided into the Meccan ("of Mecca") and Medinan ("of Medina") depending on where Muhammad lived when they were revealed to him. Nevertheless, the arrangement of Meccan and Medinan surahs in the Quran is not connected to the places of revelation.

The Quran is traditionally divided into seven (sub), thirty (juz) or sixty(hizb) roughly equal parts to make it easy to recite the entire Quran in a week, a month or sixty days.

The first decorative pieces to appear in the Quran manuscripts are verse markers separating verses (ayahs) from each other. At first, they were composed of sets of oblique strokes or circles in black, later in red ink. Then they evolved into rosettes of various shapes and elaboration, usually adorned with gold (Fig. 7).

Groups of five and ten verses are frequently marked with larger and more decorated rosettes or marginal embellishments. They stand out from the many smaller and simpler markers for single verses. Sometimes they are accompanied by a verse number, inscribed in them(Fig. 8-9). 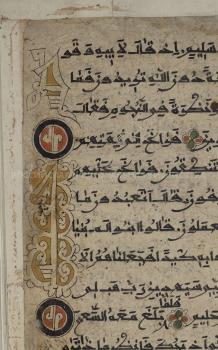 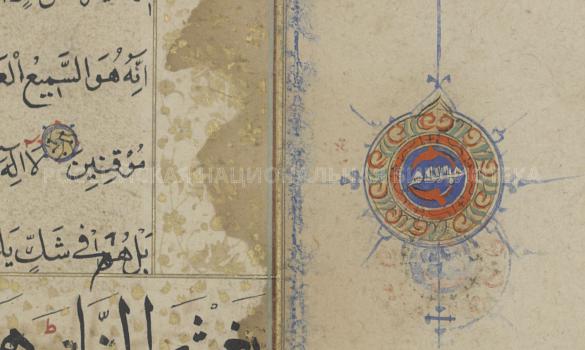 The title of the chapter usually gives the name of the surah and the number of verses it contains, and also specifies whether this chapter belongs to the Meccan or Medina period of Muhammad's life. Initially, titles were written in red, then in gold. Quite early they began to be enclosed within ornamental frames executed in gold and colours. Medallions or vignettes were employed next to the title in the margin to highlight the beginning of each chapter (Fig. 10).

Quran manuscripts commonly begin with double-page illuminated headpieces – frontispieces. Sometimes double-page illuminations – finispises stand at the end of the text. Such artistic compositions are found even in early Abbasid Qurans on parchment. This tradition continues and develops over the following centuries (Fig. 11).

Most of the early parchment Qurans were divided into seven (sub) or thirty (juz) volumes of a similar design. Each juz can further be subdivided into half (hizb). Since the ealy 16th century, the single-volume format has become much more popular than the multivolume set. However, a single-volume Quran manuscript have marginal ornaments indicating the start of a seventh part, a juz and often subdivisions of a juz too. In addition, decorations may mark a half (nisf), a quarter (rub') and a third (suls) of the text, as well as verses requiring prostration (sajdah) while reciting.

During the 11th - 13th centuries, the short firstSurah al-Fatihah and the beginning of Chapter 2 (Surah al-Baqarah were usually sited on one page, on the back of the first leaf (Fig. 13). From the 14th century, a tradition of enclosing the beginning of the book within a decorated double-page frame emerged. Thus, the space left for the text on the first spread becomes smaller than on the rest of the manuscript leaves. Surah al-Fatihah is located on the right-hand page of a manuscript, and the beginning of the second surah is on the facing left-hand page. Each chapter (surah) of the Quran begins with the same prayer phrase, the basmalah (Bism Allah al-Raḥman al-Raḥim "In the Name of God, Most Beneficent, Most Merciful!"). This symmetrical layout created an eye-pleasing effect. (Fig. 14). Since about the 16th century, this layout has been typical of Islamic art, and later it became part of the design canon of printed Qurans.

Like other books, Qurans were commissioned by people of various means and social classes, from a commoner to a courtier or a ruler of a vast empire. In addition, Quran manuscripts were also produced for religious, charitable and educational institutions, including mosques, madrasahs, revered tombs, etc. Therefore, Qurans exhibit a broad range of sizes and quality of calligraphy and illumination. The largest holy books were intended for mosques or mausoleums: massive volumes were not frequently moved from place to place, and special book stands (rehals) were used for placing Qurans during recitation. The most sizeable Quran in our collection contains 470 leaves of size 49x33 cm (Fig. 15). This volume was copied in 1025/1616, most likely in Dagestan.